I never used to like ginger.
For years I avoided it - left it out of recipes, checked ingredient lists to make sure ginger isn't too highly featured, and chosen very carefully at the Chinese to keep out of it's way.
Then I grew up, and along with peanut butter, ginger has found a firm and welcome place in my kitchen cupboard.
As such, when I had a mild cake craving the other day and fancied something different, ginger came to mind. More specifically, ginger bread. In a cupcake. Well why not?!

A quick google offered me a few possibly-viable recipes, but in the end I decided to use one as a generic base, and pretty much create my own.
The results?
Fantastic! 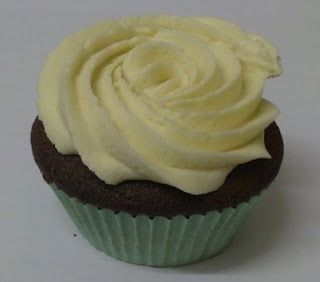 The cakes were light and airy, very slightly sticky from the black treacle, and deliciously spiced.
The addition of lemon rind to a simple buttercream frosting then took them to a new level, sublime!

The recipe was only supposed to make 12 cakes, but I found that it made significantly more than that. In fact, I managed to not only get 12 standard sized cupcakes, but also 12 mini ones as well. I think that would work out at 18 standard cupcakes.
That's quite a lot of cake... shame ;) 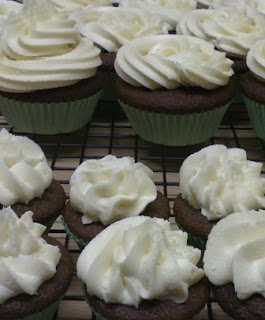 For the cakes:
Preheat the oven to 175 degrees C, and pop cases into a 12 hole muffin tin.

Cream the butter & sugar together in a large bowl until light and fluffy.
Add the treacle, egg, and egg yolk. Beat well.
Dissolve the bicarb into the hot milk, and sift all other dry ingredients into the butter/treacle mixture. Stir until just combined, then pour in the milk and beat lightly, again until just combined.
Divide the mixture into the muffin tin. (If you have leftover and don't have a second muffin tin simply keep it on the side until the first batch is out. The second batch may not rise as well, but will still be yummy!)
Bake in the oven for 20-30 minutes, until nicely springy to the touch & a skewer inserted in the middle comes out clean. Allow to cool in the tins for a few minutes, then remove to a wire rack to cool completely.

For the frosting:
Beat the butter & lemon zest in a bowl until nice and fluffy, then gradually beat in the icing sugar. When you get around halfway through the sugar beat in the juice, then continue with icing sugar.
Add more juice or sugar if the icing seems too stiff or soft, to achieved the desired consistency.
Pipe the icing onto your cooled cakes in pretty swirls! 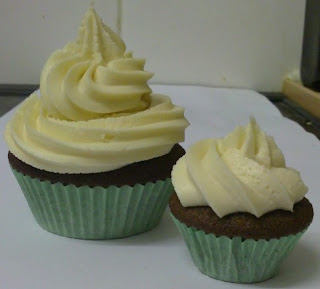 These cakes are so good that I've already decided the recipe is going to be the basis of this year's Christmas Cupcakes... the rest is a secret, for now ;)