I had a bit of a kitchen marathon over the weekend. I think maybe I was making up for not baking last weekend. Or I was incredibly bored.
Or it could have been that over the last week I stumbled across two very lovely-looking recipes for cakes that had to be tried. So I dutifully tried them both!

The first was the recipe for Vanilla Cupcakes from the Hummingbird Bakery. 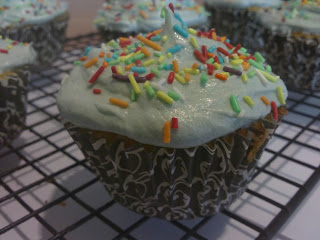 If you've never heard of them, please do go and have a look at their site. I vow on my next visit to London I must pay them a visit, though I fear I may come out slightly broke and considerably more chubby than I went in!
If you have heard of them, you may be aware that their vanilla cupcakes are considered to be very, very good. And since the Daily Mail kindly pilfered & printed the recipe from their cookbook, I felt it was only right and proper that in return I be kind enough to make them. (I must add here, their cookbook is on my wish list along with the Magnolia Bakery one. They shall be mine, one day!)

The method used to make them is slightly different from the usual cake recipes, which was another reason to give them a try as far as I was concerned. I do like to experiment with doing things differently, it helps to keep life interesting!

The recipe also mentioned that they weren't supposed to rise as much as you may expect, which I was actually quite pleased about - I have searched for a while now for a cupcake recipe that wouldn't result in a domed top - and they didn't disappoint there! That's not to say they were flat - they rose beautifully, in a lovely even, un-domed way. Very obliging little cakes. 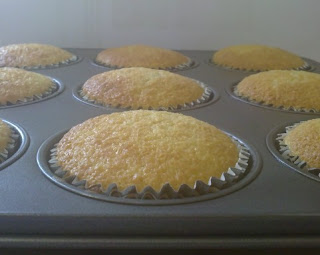 But the big question is, how did they taste?
Well, in a word, underwhelming.
The texture was wonderful - light and soft, not as dense as the equivalent formed from Victoria sponge mixture. But the actual flavour was somewhat lacking. I was expecting a glorious burst of sweet, vanilla-y butteriness. All I got was the sweet part, with a hint of "cake". Certainly not up to the hype surrounding them.
I think the addition of more vanilla may improve things somewhat, and switching the caster sugar in the recipe for granulated should tone-down the sweetness without effecting the texture. It's worth a try, as the flat-topped nature of these cakes will make them great for decorating. 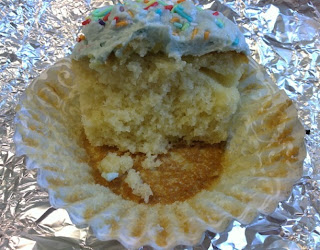 Hummingbird Bakery's Vanilla Cupcakes (makes 12, allegedly. I only got 9!)
Preheat the oven to 170 C, and line a 12-hole muffin tin with paper cases.

In a large bowl combine the flour, sugar, baking powder, and butter with an electric hand whisk. Keep whisking until well combined - the mixture should resemble sand or fine crumble topping.

Combine the milk, egg, and vanilla in a separate bowl or measuring jug. Pour this into the flour mixture in 2 or 3 additions, whisking in between additions to combine. Once all the milk is in, scrape down the sides of the bowl and keep whisking just until the batter is smooth, try not to over-mix!

The batter will be fairly runny. Spoon or pour it into the cupcake cases to around two-thirds full. You may not fill all 12, depending on how big your cases are and your idea of two-thirds!

Bake in the oven for 20-25 minutes, until cakes are a light golden colour and spring back nicely when touched. Be careful not to over bake or they will become dry.

Leave to cool in the tins for a couple of minutes, then turn out and cool on a wire rack. When completely cool, top or decorate as your heart desires!

I topped these cupcakes with a Vanilla Frosting, again from the Hummingbird Bakery book. The frosting was gorgeous, and one I would definitely use again. 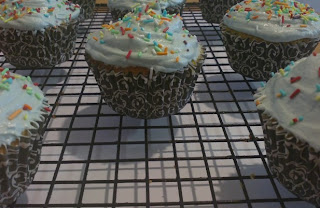