The second part of my weekend baking marathon involved attempting a recipe that I spotted on Smitten Kitchen (if you've never been there, do take a look!) for something called a Pink Lady Cake.

"A what?" thinks me. Well, it turns out that said cake is a gorgeously pink towering confection, covered in nothing less than my favourite cream cheese frosting! And to make it even better, the aforementioned gorgeous pink colour is reached by the addition of strawberry puree.

So, it's pink... it tastes of strawberries... it's covered in cream cheese frosting... exactly where does this cake fail? Ah, I see, it's an entire cake!
So of course, I simply had to see if it would turn into cupcakes! 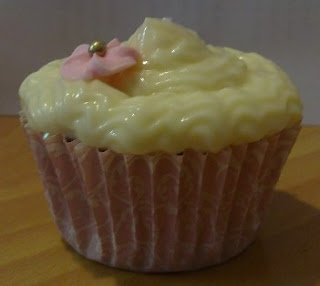 As you can probably tell from the picture, it made quite successful little cupcakes! As with the Vanilla Cupcakes they didn't "dome-up" after baking, which is a plus.


And they weren't half-bad in the taste test too. The cake was lovely and light, and very moist, with a delightful hint of strawberry flavour running through. The strawberry-ness was actually enhanced by the frosting, which surprised me as I fully expected the cream cheese to overpower the delicate fruit flavour.


After reading the post & comments on SK, I decided to add a few drops of red food colouring to the cake mix as a matter of course, so the pink colour was quite evident (though not ridiculous!).
Definitely a cake to make again! 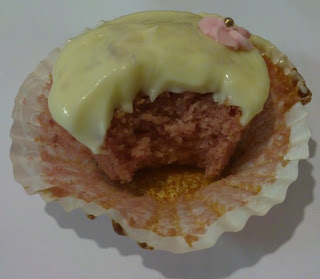 Pink Lady Cupcakes (makes 12)
Tip regarding strawberries: If you can, try to use English strawberries when they're in season, the taste is far superior and will really make these cakes taste heavenly!
If not, you can substitute frozen strawberries. Just let them defrost before blending them.


Preheat the oven to 175C, and pop cupcake cases into a 12-hole muffin tin.


Combine the flour, baking powder, and sugar in a large bowl, add the butter & strawberry puree and beat really well until light & fluffy (An electric hand whisk is good for this!)
The mixture should resemble strawberry ice cream: 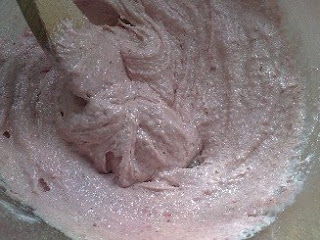 In a separate bowl or jug, combine the egg whites, milk, and colouring (if using). Add this to the cake mix in 2 or 3 stages, mixing til just combined each time.
The finished batter should look something like this: 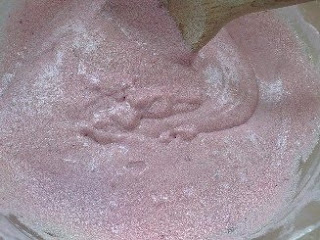 It may look like it's curdled, but just go with it - it'll come out fine!
Divide the batter into the cake cases and bake for 20-25 minutes, until a cocktail stick inserted into the centre comes out clean, and the cakes are a light goldeny-pink colour: 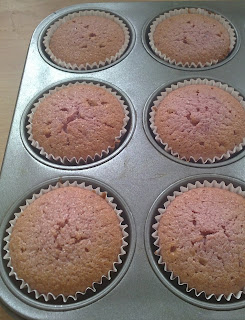 Allow the cakes to cool in the tins for a couple of minutes, then cool completely on a wire rack before topping with a generous amount of Cream Cheese Frosting! 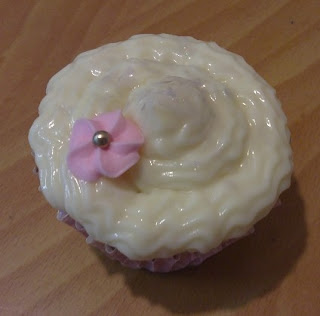